The people in the image below are climbing the walls of Afghanistan’s only soccer stadium in the capital, Kabul, to get a glimpse of the first public soccer game after the fall of the Taliban.

As is well documented, the Taliban used the stadium to carry out public executions, most notably of Zarmeena, the woman who was brutally shot on the back of her head by an AK47 in front of a crowd of onlookers by officials from the Vice and Virtue Police of the Islamic Emirate of Afghanistan.

The Taliban had outlawed music, television, movies and most forms of art — even soccer was banned for a period. Afghans were not used to having popular entertainment banned so completely under a moral code so alien to them. So much so, that when the first soccer match was held publicly, this scene ensued.

The spectators in the picture are still exclusively men, partly because of the nature of Afghan society and partly because soccer and sports are for the men. But it is also because people are reeling from ten years of draconian social codes implemented by the Taliban that had virtually banned women from going out of the house. People are still wondering at this point: Is it safe for women to come out? How much of their presence would be tolerated or accepted by a society that hasn’t seen much of them for a decade? Would the head-to-toe burqa be necessary? Could they revert to just the headscarf or even shed the veil?

But a few short years after the Taliban, women athletes began training in this stadium — sprinters and long-distance runners who trained here went on to compete in the Olympics. They have never won a medal, but the stadium is a symbol of resistance and resurgence. The women’s national soccer team and female martial artists train and do demonstrations here, proving that given the space to breathe, they will come back with a quiet strength of spirit for which they normally don’t get credit. 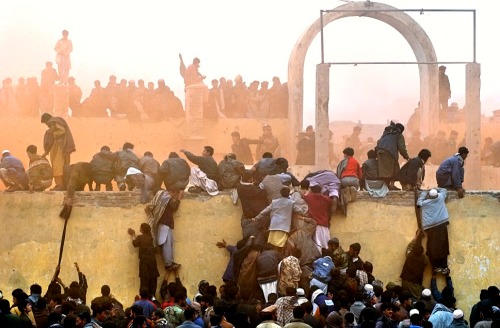 Like Loading...
This entry was posted in Afghanistan, Journalism/freedom of expression, Taliban and tagged Afghanistan, Ghazi Stadium, soccer, Taliban. Bookmark the permalink.