Iran’s intervention on behalf of Assad has brought a slew of Shia militia forces from around the world to Syria. While the Lebanese Hezabollah fighters receive the most attention, there are an estimated tens of thousands of Shia fighters from Afghanistan and Pakistan. And now evidence is emerging that they may be training in Russia.

The Afghan militia, known as the Fatemiyoun Brigade, are mostly Shia refugees and immigrations living in Iran. Iran’s Qods Force — the foreign military operations wing of the Revolutionary Guards — uses a mix of monetary incentives, promises of residency and coercion to recruit. This has led to human rights violations, including recruitment of children as young as 14.

The Fatimyoun Brigade was upgraded from a regiment of approximately 2,000-5,000 fighters to a brigade, consisting of roughly 10,000-20,000 fighters. But as their numbers have grown over the years, so has their military training.

Former Fatemiyoun fighters told this blog that they were offered a hasty three-week training inside Iran before deployment in Syria. That made sense given the canon-fodder status of the Fatemiyoun fighters who take on the toughest ground engagements against ISIS to save Assad’s army the worst of the grinding battle. If they were disposable fighters, their training could just be basic.

But it appears that Gen. Qasim Soleimani, who spends time on the frontlines with Fatemiyoun fighters and visits the families of the dead, has been busy upgrading their training program.

Earlier this year, we learned that Hezbollah fighters had started training Fatemiyoun snipers in Hama province:

This skills-transfer from a militia outfit with decades of experience to a nascent one was perhaps unsurprising. There is always an osmosis of skills and tactics between likeminded jihadist and militant groups in the region.

But now, Fatemiyoun fighters — who post to social media from their phones like soldiers elsewhere — are talking about their training courses outside Syria. In this case, the fighter is updating his followers in a public Facebook post about a training course on BMP amphibious infantry carriers in Russia prior to deployment to fight in Deir Ezzor, eastern Syria. 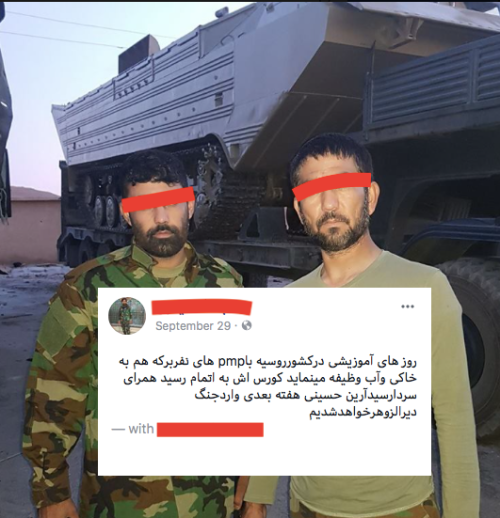 The post, made in late September, came when the various Iran-backed Shia outfits like the Fatemiyoun, Zeinabiyoun and Hezbollah (along with the US-backed Syrian Democratic Forces) were engaged in intense battles against ISIS in Deir Ezzor. Those battles have largely ended after most of Deir Ezzor was retaken from ISIS. But this post remains significant because it unveils a new aspect of Russian involvement in Syria.

We already knew that Russia offered air support to Fatemiyoun fighters in important battles such as the retaking of Paylmira. But offering technical training to Iran-sponsored, pro-Assad Shia militia from Afghanistan in Russia indicates a deeper level of Russian synergy with Iran on the Islamic Republic’s proxy project.

The true scale of the Russian training operation is not known, but for Putin to train another nation’s Islamist proxy forces on his own soil shows his comfort in the military cooperation with the Qods Force.

The revelation also indicates that Iran was investing in advanced capacity development for the Fatemiyoun perhaps partly because it wanted to make the Afghan militia units more independent of the Qods, whose personnel not only manage Fatemiyoun strategy but also operate the more sophisticated weaponry — like the BMPs, tanks and ballistics. In the process, the Qods forces also took increasing casualties, which remain unpopular in Iran because the Syria involvement is seen as an unnecessary and costly military adventure.

But on November 21, Iran declared victory against ISIS in Syria and proclaimed that the group no longer posed a threat to Shia holy Shrines in Syria, which was the original raison d’être for the Fatemiyoun. That Iran and Russia were investing in sophisticated training for the Fatemiyoun even as victory was imminent raises questions about Iran’s future plans for the Fatemiyoun: where will the battle-hardened, highly trained  Shia militia force go next?